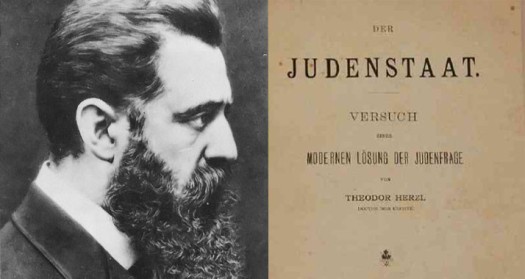 I wish to place on record my view that the policy of His Majesty’s Government is anti-Semitic and in result will prove a rallying ground for Anti-Semites in every country in the world . . . . When the Jews are told that Palestine is their national home, every country will immediately desire to get rid of its Jewish citizens, and you will find a population in Palestine driving out its present inhabitants.
— Edwin Montagu, August 1917

I’m sure many have been scratching their heads trying to figure out why on earth the government of Israel and so many staunch Zionists are just fine with the election of Donald Trump — the darling of the anti-Semitic alt-right. The answer however, is really pretty straightforward: this is nothing new. Zionism has had a cozy, if somewhat Faustian relationship with anti-Semitism since its very origins.

The founder of modern Zionism, Theodor Herzl never made a secret of his belief that his new movement would have to depend upon anti-Semitism and anti-Semites in order to create a Jewish state. In his pamphlet, “The Jewish State,” he suggested raising money for the effort by means of a “direct subscription,” adding that “not only poor Jews but also Christians who wanted to get rid of them would subscribe a small amount to this fund.”

In his diary, he was even blunter: “The anti-Semites will become our most dependable friends, the anti-Semitic countries our allies.”

True to form, in 1903 Herzl met with the Russian minister of the interior Vyacheslav von Plehve, an infamous anti-Semite who encouraged the Kishinev pogroms that very same year. Plehve’s reply: as long as the Zionists encouraged emigration of Jews from Russia, the Russian authorities would not disturb them.

This Zionist strategy was also central to the diplomatic process that led to the 1917 Balfour Declaration, in which British Foreign Secretary Arthur Balfour famously announced that his government “view(ed) with favor the establishment of a national home in Palestine for the Jewish people and will use their best endeavors to facilitate the achievement of this object.” Although Balfour has long been lionized as a Zionist hero, he wasn’t particularly well-known for his love for Jews or the Jewish people. When he was prime minister, his government passed the 1905 Aliens Act, severely restricting immigration at a time in which persecuted Jews were emigrating from Eastern Europe. At the time, Balfour spoke of the “undoubted evils which had fallen on the country from an alien immigration which was largely Jewish.” Balfour, like many Christians of his class, “did not believe that Jews could be assimilated into Gentile British society.”