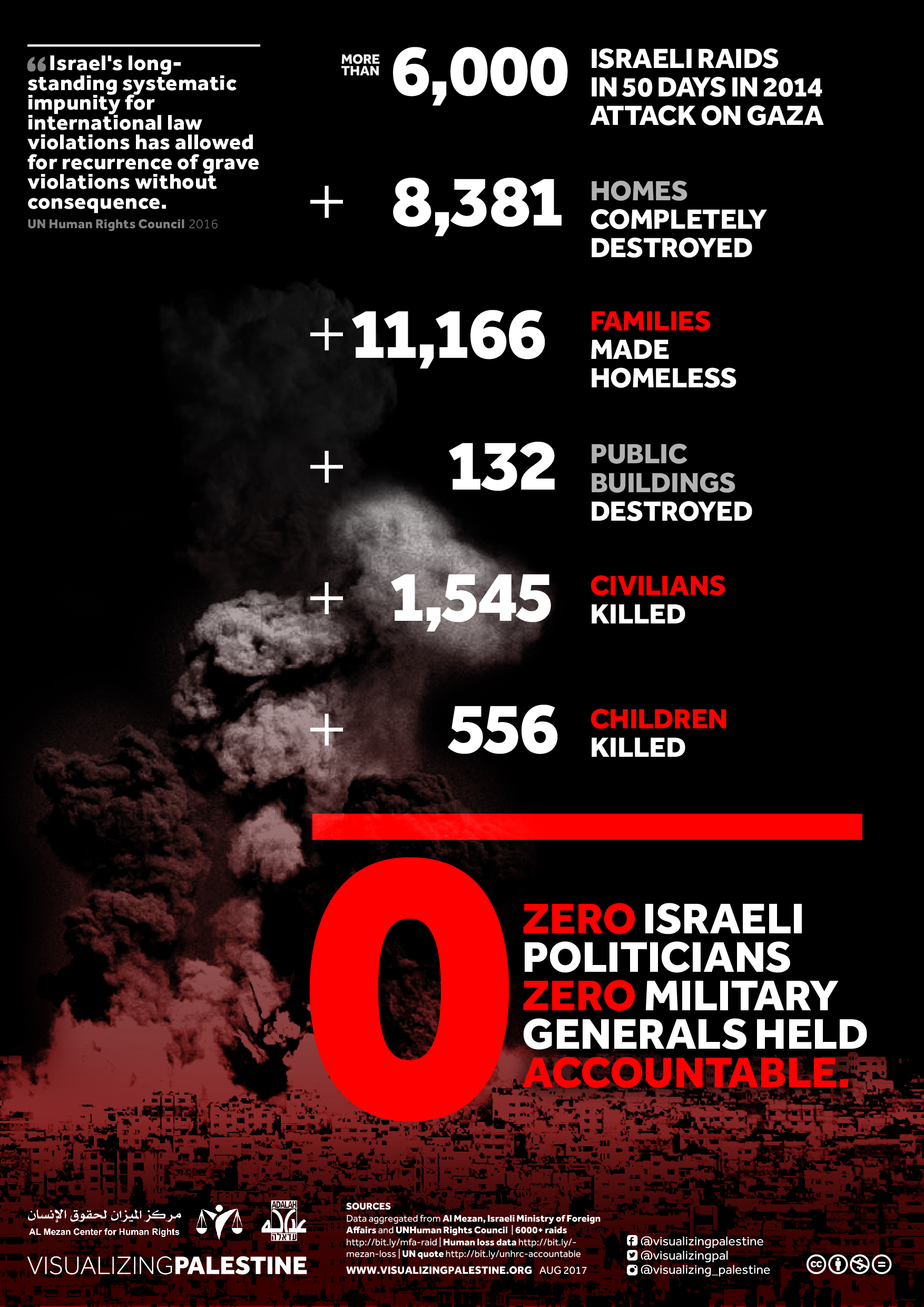 Save the Children says Gaza has become unlivable for its one million children. pic.twitter.com/MvAN4k4Bvo

We must get the Israeli public to recognize this basic human truth: Occupation by a foreign government cannot be a substitute for sovereignty, just as slavery isn’t freedom, war isn’t peace and ignorance isn’t strength.

A Palestinian state that faithfully reflects the national yearnings of all parts of the Palestinian people, which deserves national freedom like any other people  . . . will only come about with the end of the Israeli occupation and liquidation of the lion’s share of the settlement enterprise.

In one of the most trenchant articles ever written here against the occupation, Prof. Shlomo Avineri wrote that any denials of the fundamental fact that Palestinian residents of the territories — who have been under Israel’s direct or indirect control since 1967 — are under Israeli occupation “recall George Orwell’s book ‘1984,’ in which the government declares that slavery is freedom, war is peace and ignorance is strength” (Haaretz Hebrew Edition, March 17).

END_OF_DOCUMENT_TOKEN_TO_BE_REPLACED

The Australian Anglican Board of Mission is supporting treatment of children with malnourishment and anemia.

By Anglican Communion News Service
May 16, 2017

“All families are grateful for the program. Many mothers were shy when speaking to me, but their concern or happiness comes across in their facial expressions and gestures. One mother, Tahreer, said her two year old boy had improved a little after completing the program. She would like him to go for a second round of treatment so that he could continue to improve.”
— Dr, Julianne Stewart, ABM Programs Director

Since the 2014 bomb attacks, Australian Anglican Board of Mission (ABM) partner, the Al Ahli Arab Hospital (a medical facility of the Anglican Diocese of Jerusalem), has continued to help children restore and maintain their health. Parents and children are benefiting from this assistance in Beit Hanoun, a poor area of Gaza, near the Israeli border. People there were very hard hit in the 2014 bomb attacks.

The Child Nutrition Program seeks to build health profiles for children and help families that are struggling to cope. Over the course of three months, children are given a medical assessment by an expert pediatrician and a program of nutritional supplements is developed. The hospital provides the necessary supplements and monitors the children for signs of improvement. Dr. Julianne Stewart, ABM’s Programs Director, visited the Gaza Strip last year and met with some of the families that have been supported by the hospital.

On her journey, Julianne met with three year old Abdullah. Abdullah completed the program and is doing well according to the social workers and his mother. His mother Hyat is just 34 years old and has nine children under 18. Abdullah is the youngest. Hyat said, “Abdullah is doing well. I thank God he has improved. We give him his vitamins, enhanced milk, and food parcels from the Ahli. He is 12kg now.”

END_OF_DOCUMENT_TOKEN_TO_BE_REPLACED

Justin Welby’s sermon in Jerusalem talks of anger and fear in “probably the world’s most complicated region of conflicts.”

Gaza was “genuinely breathtaking, something I’ll never forget,” Welby told the Sunday programme on BBC Radio 4. Aides said he had been struck by the physical devastation of the region, the “collective trauma” of its people and their anxiety about the future. He was also inspired by the resilience of those he met, including medics who have committed to staying in the Strip.

The archbishop of Canterbury has spoken of the suffering and persecution of Christians and others in the Middle East, saying he has heard voices of anger, fear and insecurity while on a 12-day trip to the Holy Land.

Justin Welby was preaching to a packed congregation at St George’s Anglican cathedral in Jerusalem on Sunday morning before being installed as an episcopal canon later in the day.

In his 10-minute sermon, he said Christians in the region had belonged to a “suffering church for centuries. Sometimes life has been better, sometimes it is less bad. But the nature of suffering is that when it is happening it is all-consuming.”

END_OF_DOCUMENT_TOKEN_TO_BE_REPLACED

“I used to watch baseball at home while I was a child. I love it because it’s full of freedom and the only thing the player needs to do is run. Girls come and practice and the numbers are increasing. There are lots of girls who’d like to sign up despite their lack of knowledge of the sport.”
— Iman Al-Moghayer

There are no baseballs. The bats aren’t regulation. They don’t even have a baseball diamond, but that hasn’t stopped a group of Palestinian athletes from launching the territory’s first federation of baseball and softball.

The federation, headquartered in the Gaza Strip, was established in late January. By the following month, the territory had fielded its first team, composed of 20 men and 20 women. The women are the most keen, according to Tafesh, who recruited several members from a specialized sports education college in Gaza.

“We targeted this group because they had permission from their families to play sport as sports students,” Tafesh told the Associated Press. “Through them, we started to spread, attracting girls from other fields such as journalism and accountants.”

END_OF_DOCUMENT_TOKEN_TO_BE_REPLACED

“I am also discovering a degree of strength and of the basic ability for humans to remain human in the direst of circumstances. . . . I think the word is dignity.”
— Rachel Corrie

March 16th, marks the 14th anniversary of the day our daughter Rachel stood in Gaza with other international activists and challenged the Israeli military’s illegal confiscation of Palestinian land and the demolition of Palestinian homes. Rachel’s life was stolen that day, but her spirit was not. As these anniversaries approach, there are sometimes tensions as we struggle to find the best way to remember, and to explain why we do so. But in a moment of illumination, we are reminded that each March 16th is for us another opportunity to reaffirm our commitment to Gaza. It is a place that overflows with suffering, yet is filled with so much more. Rachel wrote to us about the people. “I am also discovering a degree of strength and of the basic ability for humans to remain human in the direst of circumstances. . . . I think the word is dignity. I wish you could meet these people. Maybe, hopefully, someday you will.”

During the past fourteen years, we have been blessed with our connections to Palestinians in Gaza, in the West Bank, and elsewhere in the world. We have built relationships with them and with Palestinian and Jewish Israelis who reflect the strength and dignity Rachel recognized, and with open hearts and minds steadfastly pursue justice.

END_OF_DOCUMENT_TOKEN_TO_BE_REPLACED

“To play music means to spread happiness among others. I think that even the ones who used to make people suffer and were involved in killing and destruction, would not mind to have moments of joy and happiness.”

Just outside a building in the Tal al-Hawa neighborhood of Gaza City a group of young people gather under a window to listen to the beautiful classical music coming out of the window a few meters above.

The window belongs to a small apartment used as a modest music school, which runs without proper lighting due to long hours of power cuts in Gaza. The music they’re listening to is played by Raslan Ashour, 16, who is practicing Mozart’s “Exsultate, Jubilate” on a trumpet.

As he started to play another melody, Natasha Radawn, his tutor watches closely and smiles. “His performance has improved a lot, despite some tiny mistakes,” she says.

Ashour’s passion to learn oriental and western classical music was not very welcomed by his mother who believed her son should learn “something more useful” such as management, in order to be like his father who works in the fashion business.

“My father is the one who bought me the trumpet in the first place. I have a dream of being a maestro waving a baton in front of an orchestra. Why not? I would love to be that person,” Ashour told Mondoweiss. END_OF_DOCUMENT_TOKEN_TO_BE_REPLACED

By Bo Schack, Director of UNRWA Operations in Gaza
October 21, 2016

“I have survived the past three wars, but that is not the problem. In this place, wars come and go. The bigger struggle is not to lose hope. The only way I can do that is to retreat, and create my own world, and become oblivious.”
— Ali, age 36, waiter in Gaza City

Ali was born in Gaza and for almost ten years has been living under a tight blockade on air, land and sea, entering its tenth year in June 2016. The blockade keeps him and the rest of the 1.8 million people of Gaza isolated and locked into a tiny 365 square kilometers-enclave — the Gaza Strip has one of the highest population densities in the world — tormented by extreme poverty and dilapidated by repeated conflicts.

Chronic fuel and electricity shortages, with power cuts between 18 and 22 hours per day, extreme water pollution  — 95 per cent of the Gaza groundwater is undrinkable — and devastated infrastructure, as a dire reminder of repeated cycles of armed violence, are the daily reality. Gaza’s people are denied a human standard of living. This was not always the case: before the imposition of restrictions on movements of people and goods, the Gaza Strip was a relatively developed society with a productive base and a thriving economy.

Blockade and occupation have reversed this process, accelerated by repeated Israeli military operations and widespread destruction, and today Gaza is subject to what the UN calls de-development. Located at the Mediterranean Sea between Egypt and Israel, Gaza could be famous for its palm trees, fruits and white beaches. Instead, it is known for a sewage and hygiene crisis titled by the Time magazine a “ticking global-health time bomb.

Decades of occupation coupled with severe restrictions on the movement of people and goods have undermined the living conditions and reduced access to livelihoods for Palestinians. Food insecurity is mostly due to a lack of economic access: food prices are mainly driven by Israel and out of reach for many poor households — the GDP per capita in Palestine (USD 4,700) is six times less than that of Israel (USD 30,000).

The impact of the 2014 conflict in Gaza continues to be devastating to the Palestinian people and economy. Against this backdrop, more than 27 percent of the population — or 1.6 million people — suffers from food insecurity. In Gaza, one in two is food insecure, and one in three is severely affected.

As poor and vulnerable Palestinians spend more than half of their income on food, WFP’s assistance is critical to meet their food needs. This prevents further deteriorations in food security and livelihood status, and prevents negative coping mechanisms. WFP targets 600,000 of the most vulnerable, food insecure non-refugees in Palestine who have been affected by the ongoing conflict and occupation, a fiscal crisis and a steady decline in living standards. WFP has been present in Palestine since 1991.