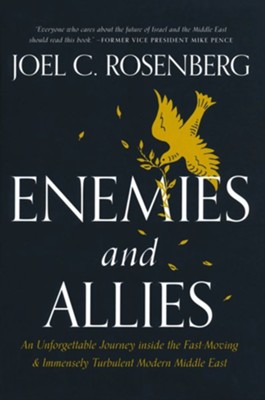 A book review critical of what is missing in the conversation about peace and justice in the Middle East and fails to shed light on discussion of an independent state or the right of self-determination.

…while one can argue about issues of evangelical representation, it is even harder to take Rosenberg seriously regarding peace and justice in the Middle East.

You would think that Joel Rosenberg’s own identification is enough to turn off any non-Israeli Middle East leader. He prides in his Christian Zionist evangelical ideology and boasts of his newly adopted Israeli citizenship, brought about most likely because his father is of the Jewish faith. He is similarly proud that his two sons have served in the Israeli army, one in a special unit.

Yet reading his latest book, Enemies and Allies, one is taken back by how leaders of major Arab countries, kingdoms, and emirates open the doors for him for repeated visits and audiences with their own top leaders.

Rosenberg, his family and different delegations of pro-Israel white evangelical leaders have been invited and have met the leaders of Jordan, Egypt, Saudi Arabia, the United Arab Emirates and Bahrain. Ironically, these very visits and meetings with Arab heads of state probably helped him to visit the previous president of the United States in the Oval Office with the help of then-Vice President Mike Pence.