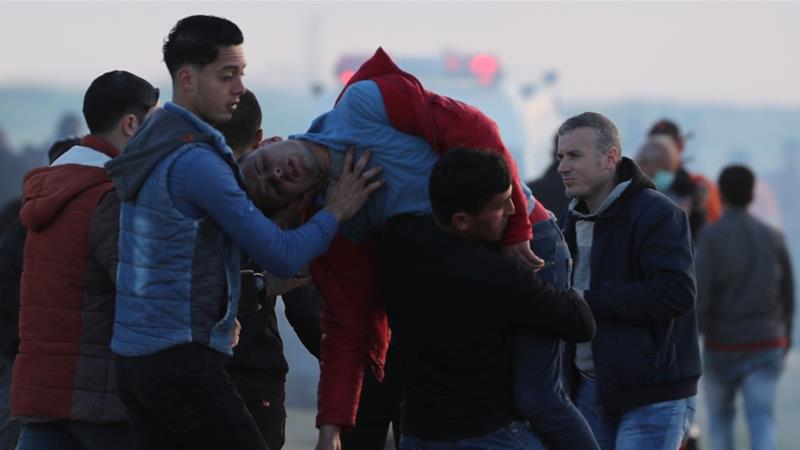 A wounded Palestinian is evacuated during a protest at the Israel-Gaza border fence, east of Gaza City on February 22, 2019. (photo: Mohammed Salem / Reuters)

A powerful Israeli lobby, reporting fatigue and the fear of being accused of anti–Semitism harms coverage, say experts.

Everyone is terrified of putting a foot wrong and being accused of being anti-Semitic that they daren’t even ask the necessary questions.
— Sarah Helm, journalist

Often dubbed an open-air prison on account of Israel’s and Egypt’s ongoing air, land and sea blockade of the coastal enclave, Gaza is, according to Amnesty International and several other rights groups, on the brink of a humanitarian disaster.

In February, Antonio Guterres, the United Nations secretary-general, highlighted the crisis, saying that the near two million Palestinians of the besieged strip “remain mired in increasing poverty and unemployment, with limited access to adequate health, education, water and electricity”.

But the mainstream media does not always succeed in telling Palestine’s contemporary story with accuracy and empathy.

On Thursday, in the Scottish city of Glasgow, experts discussed the media’s role in covering one of the most pressing and divisive issues in international politics.

Al Jazeera interviewed three of the panelists before the event, which was hosted by The Balfour Project, a campaign group created by British citizens to raise awareness over Britain’s record in Palestine before and during its Mandate.