Norwegian member of parliament, Bjørnar Moxnes, nominated the BDS movement for Palestinian rights for the Nobel Peace Prize on Feb 2.

By Unitarian Universalists for Justice in the Middle East | Feb 9, 2018

Unitarian Universalists for Justice in the Middle East (UUJME) strongly supports the nomination of the Boycott, Divestment and Sanctions (BDS) movement for Palestinian rights for the Nobel Peace Prize. Justice and human rights have been systematically denied the Palestinian people, and UUJME is convinced that this tragedy is at the heart of the war, violence and turmoil that has characterized the Middle East for 70 years. We are convinced there will not be lasting peace for anyone in the region without justice for the Palestinians, and the BDS movement for Palestinian rights is the world’s best hope for achieving that justice.

A member of the Norwegian parliament, Bjørnar Moxnes, has nominated the BDS movement for Palestinian rights for the Nobel Peace Prize. UULME have been asked by the US Interdenominational Palestine Working Group to support the nomination with a statement on our website. The goal is to persuade the Norwegian public and the Nobel committee that there is broad support for the nomination.

END_OF_DOCUMENT_TOKEN_TO_BE_REPLACED 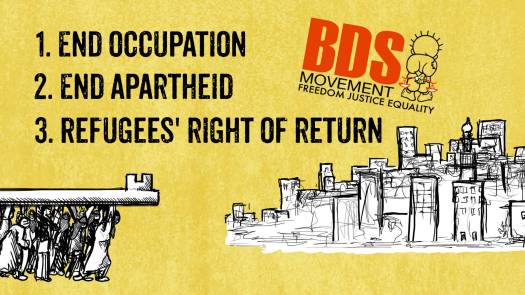 The human rights movement is currently the subject of anti-boycott laws in Israel, the US, and elsewhere.

“We are well aware that the current right-wing government of Israel tends to try to criminalize any attempt to convince Israel to abide by international law and end the occupation and oppression of Palestine and the Palestinians.”
— Bjørnar Moxness, Norwegian Member of Parliament

The Boycott, Divestment and Sanctions (BDS) movement for Palestinian rights has been nominated for the 2018 Nobel Peace Prize. Formal nomination for the prestigious award was made last week by the Norwegian MP and leader of the Red Party, Bjørnar Moxness.

In a statement announcing the nomination, the Parliamentary Group, which includes a number of left-wing parties, said that the selection of BDS for a Nobel Peace Prize reflected “the growing international solidarity with the Palestinian struggle for justice, dignity and freedom from the Israeli occupation.”