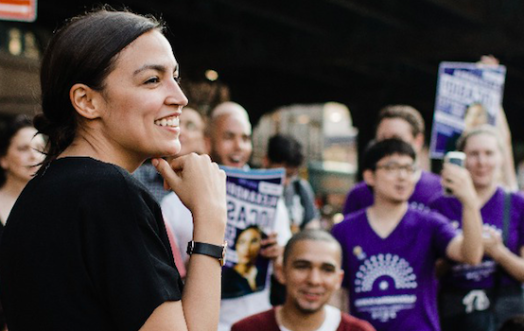 One rabbi responds to another’s criticism of Ocasio-Cortez’s statements on Israel-Palestine.

As a public figure, Ocasio-Cortez responded to clear human rights abuses in a forthright and courageous manner. She deserved much more than a condescending lecture and a personal invitation to your own “nuanced” tour of Israel/Palestine.

While I share your admiration for Alexandria Ocasio-Cortez’s recent victory in New York’s 14th Congressional District, I am dismayed by the heavy-handed way you chose to convey your congratulations. I’m referring to your open letter to her (Jewish Journal, 7/4/18) in which you expressed your concern that her public statements about Israel and Palestine indicated a “less than nuanced perspective” and invited her to join you on a tour of the region.

While you did not identify which of her public statements you were referring to, I can only assume you meant this recent tweet, which she posted in response to Israel’s violent military response to Palestinian protesters in Gaza:

This is a massacre. I hope my peers have the moral courage to call it such. No state or entity is absolved of mass shootings of protesters. There is no justification. Palestinian people deserve basic human dignity, as anyone else. Democrats can’t be silent about this anymore.

END_OF_DOCUMENT_TOKEN_TO_BE_REPLACED

A Sermon for Rosh Hashanah 5777

“While we appreciate the important role of the land of Israel in Jewish tradition, liturgy and identity, we do not celebrate the fusing of Judaism with political nationalism. We are non-Zionist, openly acknowledging that the creation of an ethnic Jewish nation state in historic Palestine resulted in an injustice against its indigenous people — an injustice that continues to this day.”

As I’m sure you know, Tzedek Chicago has received a great deal of attention — some might call it notoriety — for calling ourselves a “non-Zionist” congregation. But contrary to what our most cynical critics might say, we didn’t choose this label for the publicity. When we founded Tzedek Chicago last year, we used this term deliberately. We did so because we wanted to create an intentional community, based on specific core values. Our non-Zionism is not just a label. It is comes from our larger conviction to celebrate “a Judaism beyond nationalism.” [Continue reading here . . . ]