Officials in the West Bank say they are willing to let the Palestinian Authority collapse if Israel applies its sovereignty over occupied territory.

‘We are pragmatic…We don’t want things to reach a point of no return. Annexation means no return in the relationship with Israel.’
— Hussein al-Sheikh, the Palestinian official in charge of relations with Israel

RAMALLAH, West Bank — The Palestinian Authority says it will cut the salaries of tens of thousands of its own clerks and police officers. It will slash vital funding to the impoverished Gaza Strip. And it will try any Israeli citizens or Arab residents of Jerusalem arrested on the West Bank in Palestinian courts instead of handing them over to Israel.

Desperate to deter Israel from annexing occupied territory, the Palestinians are taking a number of provocative steps to break off cooperation with Israel and force it to shoulder full responsibility, as a military occupier, for the lives of more than two million Palestinians on the West Bank.

END_OF_DOCUMENT_TOKEN_TO_BE_REPLACED

A hasbarist argues there’s nothing wrong in the killing of Eyad al-Halaq.

The comparison between the policeman nonchalantly stepping on a citizen’s neck for nine minutes and one hounding an autistic person into a garbage room is automatic and immediate.

Israeli militants murdered Eyad al-Halaq last Saturday in Jerusalem, and for many Israelis this particular murder– of an autistic person begging for his life in an outdoor garbage room where he vainly sought refuge, with his mentor screaming at the militants that he is an invalid, with him crying “I’m with her”– penetrated all their defensive layers. Defensive layers lovingly built by the hasbara apparatus for years, convincing people what they see is not actually what it seems, that what looks like murder is in fact a necessary military action.

END_OF_DOCUMENT_TOKEN_TO_BE_REPLACED

There is renewed scrutiny over program where thousands of American law enforcement officers have gotten Israeli training which promotes military occupation as a positive model for community policing.

George Floyd’s killing by Minneapolis police on May 25 has prompted some to liken American policing methods to Israeli occupation policing, and to point out that many US police officers have gotten training from Israeli officials under the sponsorship of Israel lobby organizations.

For instance, the Morning Star published an article saying that the Minneapolis police force once received training from Israelis. The training was eight years ago and there is no evidence that the officers who killed Floyd got the training.

END_OF_DOCUMENT_TOKEN_TO_BE_REPLACED

A statement from the Palestine Liberation Organization with affirmation to continue to demand and work for justice and accountability because they are the cornerstones of peace.

The community of nations must choose between the relevance of the international order and the continuation of Israeli exceptionalism.

Fifty-three years ago, Israel usurped control over the West Bank, including East Jerusalem, and the Gaza Strip. This illegal military occupation has defied all legal parameters, with Israel entrenching its colonial control over Palestinian land and rights through a systematic policy of displacement, replacement, and land grab.

For over half a century, Israel has been able to consistently and brazenly defy international law and inalienable Palestinian rights because the international community unduly afforded the occupation exceptional treatment and protection from accountability. Contrary to the legal, political, and moral obligations of states to uphold international law, they persisted in rewarding lawless Israeli behavior while demanding Palestinian acquiescence and docility. The result has been a toxic culture of impunity and the normalization of racial discrimination and brutal oppression.

END_OF_DOCUMENT_TOKEN_TO_BE_REPLACED 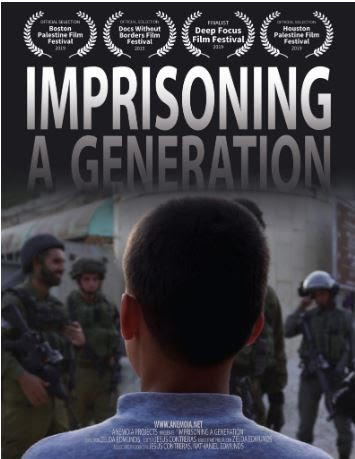 Please join our brothers and sisters at St. Mark’s Cathedral Episcopal Mideast Focus Ministry for a zoom video showing and discussion of Imprisoning A Generation, a feature-length documentary film that presents the personal testimony of four young Palestinians who have survived detention in the Israeli prison system.The documentary will be paired with the award-winning short film, Today They Took My Son by Farah Nabulsi. A discussion with Dr. Alice Rothchild will follow.

Join us through Zoom to watch the films online together as a group on Friday evening only at 7 p.m.

Immediately following the films, (approx. 8:15 p.m.) we will have a discussion with Dr. Alice Rothchild in the same Zoom meeting.

Due to restrictions by the film’s distributor, you will need to RSVP by email and then be sent a link to watch the film and join the discussion. Send an email to the ticket address above.

Many questions arise at the failure of the press to cover the the killing of an unarmed autistic man.

Halbfinger’s refusal to say the name of Eyad Al-Halaq even extended to his Twitter feed; not a word.

At a time when headlines are dominated by the protests over the murder of an unarmed black man in the United States, the New York Times is ignoring a similar police killing in Israel. Palestine’s counterpart to George Floyd is Eyad Al-Halaq, the 32-year-old autistic man who Israeli police shot dead on May 30 inside occupied East Jerusalem’s Old City — 3 days ago. His killing is big news in Israel/Palestine, and worldwide. Some of the reports cite the slogan that echoes the nationwide upheaval in America: “Palestinian Lives Matter.”

But the New York Times has not published a single word about him.

END_OF_DOCUMENT_TOKEN_TO_BE_REPLACED

Please join our brothers and sisters at Churches for Middle East Peace (CMEP) to hear Rev. Isaac and Father Khader talk and learn how Christian leaders in Palestine are responding to the possibility of annexation.

Join Kyle Cristofalo, Churches for Middle East Peace’s Senior Director of Advocacy and Government Relations, as he speaks with Rev. Munther Isaac and Father Jamal Khader on Thursday, June 4, from 11am-12pm Eastern. Rev. Isaac and Father Jamal
will address the devastating impact annexation will have for the future of the Christian community in Palestine. Learn more about how Christian leaders in Palestine are responding to the possibility of annexation and how you can use your voice to advocate for justice and freedom for all in Israel-Palestine.

Palestinian activists are drawing parallels between Israel’s slaying of Palestinians and the rampant killings of unarmed black men in the U.S at the hands of the police.

‘The latest execution-style killing brings, to at least 21, the number of Palestinians killed by Israeli occupation forces in such senseless acts of violence since January,’
— Hanan Ashrawi, Palestinian leader and legislator

Eyad al-Halaq, 32, was on his way to a school for children and adults with disabilities where he was a student when Israeli police ordered him to stop for a search when they spotted a “suspicious object that looked like a pistol.”

Al-Halaq, who according to statements from his family has the “mental age of a six-year-old child,” was reportedly spooked by the police and began rushing away from them.

END_OF_DOCUMENT_TOKEN_TO_BE_REPLACED

The largest Palestinian boycott coalition released a statement to announce its resolute solidarity with #BlackLivesMatter protesters.

‘To our Black brothers and sisters, your resilience in the face of brutal dehumanisation is a source of inspiration to our own struggle against Israel’s regime of occupation, settler-colonialism and apartheid.’
— Palestinian BDS National Committee

The Palestinian BDS National Committee [BNC] has come out to support the anti-police brutality protests in the United States, confirming its unwavering support for black organisations and the Black Lives Matter movement.

BNC, the largest coalition in Palestinian society that leads the global Boycott, Divest and Sanctions [BDS] movement, extended its “solidarity with our Black brothers and sisters across the US who are calling for justice in the wake of the latest wave of insufferable police murders of Black Americans”, a statement released by the organisation on Sunday evening said.

“The genocidal destruction of native American nations, the pillage of their wealth and resources, and the savage enslavement of millions of Africans constitute the most profound pillars of what became the US.

END_OF_DOCUMENT_TOKEN_TO_BE_REPLACED

On June 1, join people around the world for a social media day of action to honor Palestinian health care workers.

Between March and August of 2018, more than 400 Palestinian medical personnel were injured by Israeli attacks at those protests while 61 medical vehicles and two health clinics were damaged, according to Medical Aid for Palestine.

On June 1, 2018, 21-year-old Razan al-Najjar was shot and killed by an Israeli sniper while working as a volunteer paramedic with the Great March of Return in Gaza, providing care and assistance to people injured during protests. Razan was wearing a white medical vest and, according to witnesses, had her arms raised above her head when she was killed. Nobody has been held accountable for her killing.

Razan was one of three medical personnel killed by Israeli soldiers while aiding protesters during the first year of the Great March of Return. Between March and August of 2018, more than 400 Palestinian medical personnel were injured by Israeli attacks at those protests while 61 medical vehicles and two health clinics were damaged, according to Medical Aid for Palestine. Nobody has been held accountable for these attacks, either.