Efforts to privatize settlements could be the next legal expansion in further delaying/denying Palestinian rights.

Their latest proposal has been described as engineering a ‘revolution’ in the occupation regime. It would let the settlers buy as private property the plots of occupied land their illegal homes currently stand on.

The United Nations’ independent expert on human rights in the Palestinian territories issued a damning verdict last week on what he termed “the longest belligerent occupation in the modern world”.

He warned of a recent surge in violence against Palestinians from settlers, assisted by the Israeli army, and a record number of demolitions this year of Palestinian homes in East Jerusalem – evidence of the ways Israel is further pressuring Palestinians to leave their lands.

END_OF_DOCUMENT_TOKEN_TO_BE_REPLACED

A look into the birth and growth of Zionism in history and context in order to understand its aspirations and contradictions.

‘Political Zionism is a recent phenomenon. This is very different from my zayde’s messianic Zionism which was more a belief that the Messiah would come someday and everything would get better, but don’t hold your breath. This was often followed by a fatalistic shrug and more davening.’

Today I’m going to be discussing the recently published book, Reclaiming Judaism from Zionism: Stories of Personal Transformation. The book is a collection of curated essays by rabbis, students, academics, and activists, and includes my chapter titled: Choosing a different path. I am going to start with some definitions that I have gleaned from my own personal research and also from the excellent introduction written by Professor Carolyn Karcher who is the editor of this book.

I would define Judaism as a religion, centered on tikkun olam, on pursuing justice and loving the stranger. It is a body of sacred texts, rituals, and ethical precepts. This is very different from the definition of a Jewish macher (see Yiddish – big shot) in Boston who once said in answer to the question: “Can you be a Jew and not be a Zionist?” “You don’t understand, Israel is the religion.” Clearly I take issue with that.

END_OF_DOCUMENT_TOKEN_TO_BE_REPLACED

‘If you want military aid, you’re going to have to fundamentally change your relationship’ to Gaza…adding that some aid money ‘should go right now into humanitarian aid in Gaza.’
— Senator Bernie Sanders

Democratic presidential candidates diverged on Monday over the question of whether to condition United States military aid on Israeli policy toward the Palestinians, which activists at the annual J Street conference here in Washington seem to be trying to make something of a wedge issue in the crowded primary field.

In separate appearances before the conclave, Sen. Bernie Sanders and Mayor Pete Buttigieg said the $3.8 billion a year should indeed come with some strings attached, while Secretary Julian Castro said using the aid as a pressure tactic “wouldn’t be my first move” and Sen. Michael Bennet said he would want to carefully weigh the impact on domestic politics both here and in Israel.

END_OF_DOCUMENT_TOKEN_TO_BE_REPLACED

The Executive Council voted to adopt the recommended Global Human Rights Screen with ‘criteria for the Israel//Palestine conflict.’

Adoption of the Global Screen & Criteria puts in place an Episcopal Church Human Rights No Buy List, administered by CCSR, to apply to corporations that resist effective engagement on human rights.

Meeting in Montgomery, Alabama on 18-21 October the Council voted to receive the June 2019 Report of its Committee on Corporate Social Responsibility (CCSR) on resolution B016 and adopt the recommended Global Human Rights Screen (GHRS) with “criteria for the Israel//Palestine conflict.” The GHRS is modeled on the ELCA’s human rights screen and is consistent with policy adopted by General Convention or Executive Council over the last six decades. PIN lauds the clear criteria established by the GHRS for deciding if a corporation supports or benefits from denial of human rights in the Occupied Palestinian Territories (OPT). These are,

END_OF_DOCUMENT_TOKEN_TO_BE_REPLACED

A children’s book expressing pride in being Palestinian is being used to create fear.

A prominent local rabbi declared the book a travesty and threatened to evict a Manhattan bookstore selling it from the synagogue’s annual book fair.

A few years ago, Iranian author and Rutgers faculty member, Goldbarg Bashi, published a children’s alphabet book, P is for Palestine (now out of print). It is an abecedary for children, teaching them words associated with the Palestinian struggle for justice and national rights. Somehow the book has become a cause celebre for the pro-Israel community in the New York metropolitan area. A prominent local rabbi declared the book a travesty and threatened to evict a Manhattan bookstore selling it from the synagogue’s annual book fair. The bookstore caved to pressure and released a statement saying it opposed the book’s content, but continued selling it, hiding it behind the counter as if it was a banned substance.

END_OF_DOCUMENT_TOKEN_TO_BE_REPLACED

Israel has ignored warnings by the United Nations that Gaza is about to become uninhabitable, acting as if Palestinians there can be caged, starved and abused indefinitely.

‘Without urgent, vigorous action, plagues and infections will break out that could cost a great many lives, both in Israel and in Gaza, and no fence or Iron Dome [Israel’s missile interception system] can thwart them.’
— Gideon Bromberg, the Israeli director of EcoPeace Middle East

The only way Israelis can be made to sit up and take note of the disaster unfolding next door in Gaza, it seems, is when they fear the fallout may spill out of the tiny coastal enclave and engulf them too. Environmental experts from two Israeli universities issued a report in June warning that the imminent collapse of Gaza’s water, sewage and electricity infrastructure would soon rebound on Israel.

Gideon Bromberg, the Israeli director of EcoPeace Middle East, which commissioned the report, told journalists: “Without urgent, vigorous action, plagues and infections will break out that could cost a great many lives, both in Israel and in Gaza, and no fence or Iron Dome [Israel’s missile interception system] can thwart them.” Israel’s liberal Haaretz newspaper paraphrased another of Bromberg’s comments: “If something isn’t done, the upshot could be political horror in the form of hundreds of thousands of Gazans fleeing for their lives toward Israel – for fear of catching disease.”

END_OF_DOCUMENT_TOKEN_TO_BE_REPLACED

A bit of truth amidst a history of occupation.

‘Having seen the experience of the evacuation of Gaza, I don’t believe that there is a realistic plan that can be implemented that will require anyone, Jew or Arab, to be forced to leave their home.’
— David Friedman, US Ambassador to Israel

The US Ambassador to Israel David Friedman told Israeli news website Arutz Sheva on Thursday that he believed the US Embassy move from Tel Aviv to Jerusalem “promoted peace” and that “uprooting” Jews or Arabs in the event of a US peace plan in the region would be “inhumane.”

In an extensive interview with the news site, which covered topics from the 1967 war to Iran, Friedman was asked about President Donald Trump’s elusive peace plan, and the future status of Israeli settlements in the occupied West Bank.

END_OF_DOCUMENT_TOKEN_TO_BE_REPLACED 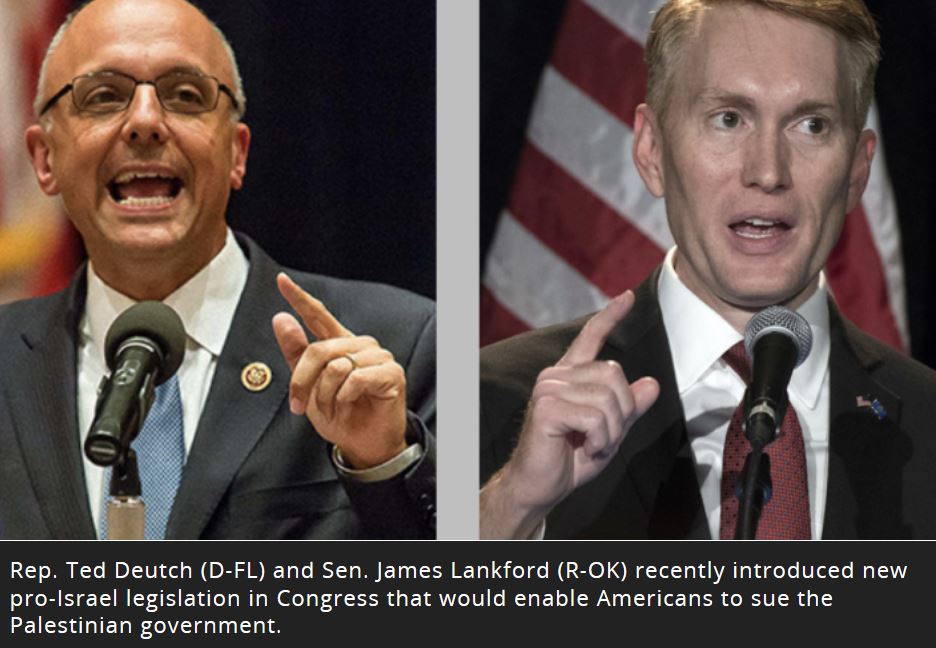 New legislation introduced in Congress would potentially destroy the ability of the Palestinian leadership to engage in diplomatic and legal channels to support Palestinian national aspirations.

H.R.1837 (and its twin S.2132) is written in such a way that undermines ‘the ability of the Palestine Liberation Organization (PLO) to engage diplomatic and legal channels to support Palestinian national aspirations and to seek accountability through international mechanisms.’
— Zaha Hassan,  human rights attorney

In addition to the roughly two dozen Israel-related bills in various stages currently before Congress, new legislation would open the Palestinian Authority (PA) to disastrous lawsuits and quash any hopes of a negotiated settlement with Israel. The PA has its share of corruption, as it attempts the impossible task of ruling while under the thumb of Israeli occupation. Nevertheless, analysts say that a dissolution of the Palestinian government through U.S. legislation could be catastrophic.

Current legislation promoted by segments of the Israel lobby would do just that.

The latest bipartisan legislation would enable American victims of political violence in Israel to work through the American court system to collect damages from the Palestinian government. (Notably, it would not afford American victims of Israeli violence, such as this 16-year-old, the same opportunity.)

END_OF_DOCUMENT_TOKEN_TO_BE_REPLACED

The following remarks are from presentation by Rev. Alex Awad at conference “A Response to Christian Zionism” held in Seattle WA Oct 5, 2019. These reflections are his experiences as a Palestinian meeting people who are Christian Zionists.

The passion of Christian Zionists to bring Jews to the Holy Land and create a Jewish state and their success in achieving their goal was accomplished through piling layer upon layer of wars, massacres, bloodshed, ethnic cleansing, political manipulations and pain.

I am here participating in this symposium because millions of people have been severely and negatively impacted as a result of the political thrust of Christian Zionism. The passion of Christian Zionists to bring Jews to the Holy Land and create a Jewish state and their success in achieving their goal was accomplished through piling layer upon layer of wars, massacres, bloodshed, ethnic cleansing, political manipulations and pain. Millions of Palestinians, Jordanians, Lebanese, Syrians, Iraqis, Egyptians and Jews have suffered death and destruction. This has been in large part due to the theological convictions and political activities of Christian Zionist leaders combined with the political might of secular Zionists and the religious zeal of Jewish settlers. Were Christian Zionism confined to theology and theological assumptions alone, I wouldn’t be so concerned about it and I wouldn’t be as driven as I am in exposing the harmful consequences of its teachings.

END_OF_DOCUMENT_TOKEN_TO_BE_REPLACED

Around the world, rich and poor countries alike are pulling up their drawbridges, slashing the number of refugees they are willing to accept, and denying asylum to those who might have been admitted in the past.

Derived from the ancient Greek asulos, which roughly translates to ‘inviolable,’ the word ‘asylum’ first entered the English lexicon in the late Middle Ages, when it was understood to mean ‘an inviolable shelter or protection from pursuit or arrest.’ By definition, an asylum seeker was a person who sought a form of protection that could never be violated, broken, or infringed upon.

A small tent city is taking shape in Tapachula, on the Mexican-Guatemalan border, and its inhabitants are living proof of the systematic erosion of one of the foundational principles of the post–World War II international order. The residents are primarily refugees and migrants from African countries who fled political persecution, social upheaval, and economic uncertainty, taking one of the longest and most perilous migration routes in the world in the hope of reaching the United States.

Until recently, most would have been granted a 21-day grace period to either normalize their residency status in Mexico or continue on to the U.S. border. But since the U.S. Supreme Court ruled in May that the administration of President Donald Trump can deny asylum to anyone who has crossed a third country en route to the U.S. border, Mexico has started denying Africans free passage through its territory. And so the migrants arriving in Tapachula have nowhere to go. They are trapped between hard-line U.S. asylum policies, Mexico’s acquiescence to those policies, and a growing global backlash against anyone seeking asylum.