The Finance Ministry will allow the Jerusalem municipality to waive the required permits.

“We will not allow needless bureaucracy to hold up the transfer of the American embassy to Jerusalem, Israel’s eternal capital.”
— Israeli Finance Minister Moshe Kahlon

Israel has expedited construction permits to enable temporary quarters for the US Embassy to open in Jerusalem as planned in May, the Finance Ministry said on Tuesday.

US President Donald Trump in December broke with other world powers by recognizing Jerusalem as Israel’s capital and announcing the US Embassy would be moved there from Tel Aviv.

Trump’s reversal of decades of US and broad international policy was welcomed by Israeli Prime Minister Benjamin Netanyahu as a “historic decision.” But it drew criticism from around the world and outraged Palestinians, who want a capital for their own future state in eastern parts of the city.

Israel has said the Embassy will be opened on May 14, the 70th anniversary of its founding. A US official said it would be located at a provisional site in Jerusalem that now houses a US consular section.

END_OF_DOCUMENT_TOKEN_TO_BE_REPLACED

I try not to think about how, later this month, I will enter the Erez checkpoint from the Israeli side and cross back into Gaza, unsure when, if ever, I will be allowed to leave again.

Friends and family back home keep asking, “How’s life outside Gaza?” I can’t answer. How to tell people who live on four to six hours of electricity daily that high-rise buildings in New York leave their lights on 24 hours a day, simply because it looks nice? How it feels to live without generator noises, the deafening roar of Israeli military drones at night, or the constant fear of imminent conflict? Or that you can hop on a bus, train or plane on a whim, without needing a permit, and travel across the world?

I was born and grew up in Gaza. My father was a soccer coach for many years and his stories about his travels to other countries always made me want to travel too. But Israel imposed a land, air and sea blockade on Gaza in 2007 and has kept Gaza mostly closed ever since. So I never made it out until now, at age 31, I was allowed to leave — for just a little while.

I work for a global human rights organization and spent months seeking the exit permit from the Israeli government that would allow me to leave, to participate in security and research training sessions, to attend key organizational meetings, and to meet colleagues based just a short drive away in Jerusalem or Ramallah — to say nothing of those overseas. But I faced obstacles every step of the way to obtaining the documents and permissions I needed simply to get out of Gaza itself — until I got a phone call on January 28.

END_OF_DOCUMENT_TOKEN_TO_BE_REPLACED

At least 15 killed when Israeli soldiers open fire during mass demonstrations in Gaza.

“There is fear that the situation might deteriorate in the coming days.”
— Tayé-Brook Zerihoun, assistant UN secretary general for political affairs

Gaza hospitals, running low on blood and overstretched by the huge number of wounded, were reeling after one of the enclave’s bloodiest days outside of open war, in which Israeli soldiers shot 773 people with live ammunition, according to the ministry of health.

Fifteen of the wounded died, said the ministry spokesperson Dr Ashraf al-Qidra. “Most of the dead were aged between 17 and 35 years old,” he said. “The injuries were on the upper part of the body.” He added that the remainder of the wounded, some of whom were in a critical condition, had been “shot with live ammunition.”

The violence erupted on Friday after mass demonstrations took place demanding the right of return for Palestinian refugees and their descendants to land in Israel.

END_OF_DOCUMENT_TOKEN_TO_BE_REPLACED

The Israeli Army presented data to the Knesset showing 6.8 million Palestinians now living in Israel-Palestine, but only 6.5 million Jews.

“Between the Jordan River and the Mediterranean there is an equal number of Palestinians and Jews, and that’s nothing new. That’s why the crossroads where we presently find ourselves is clear: either two states based on 1967, or one state that is an apartheid state, or one democratic state in which everyone has the right to vote. There is no other option, and at least this simple truth has to be stated clearly.”
— Knesset Member Ayman Odeh, head of the Joint List

The Israeli army presented data on Monday to a Knesset panel which show that more Arabs than Jews live between the Mediterranean and the Jordan River.

According to Civil Administration’s deputy commander Col. Haim Mendes, five million Palestinians live in the West Bank and the Gaza Strip. This figure does not include the hundreds of thousands of Palestinians living in East Jerusalem, or the 1.8 million Israeli Arabs. According to Israel’s Central Bureau of Statistics, as of September 2017 some 6.5 million Jews live in Israel. . . .

END_OF_DOCUMENT_TOKEN_TO_BE_REPLACED 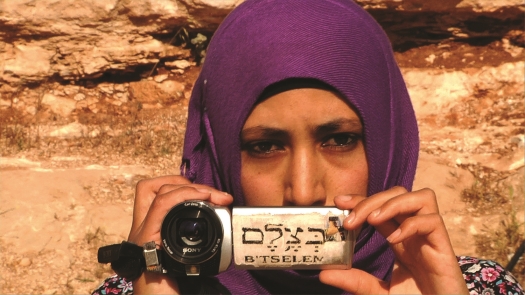 This film explores the daily lives of Palestinian women living in the West Bank. It portrays their stories in a novel and eye-opening manner through footage captured by the women themselves. Their courage is inspiring as they persist in working for change — and to pave the way for future peace in the region.

Our concern is to help balance the limited and confusing media coverage of the Holy Land. We use compelling films as an entry point for reflection and discussion. As Christians, we respond to Christ’s call to seek justice and love the oppressed. As Americans, we ask: Can we reconcile this calling with our government’s massive financial support of Israeli military operations? We hope the time will come when Jews, Muslims and Christians will again come together in harmony in the Holy Land.

In this series, we see how people pushed to bring about a safe country for the Jewish people, and how today others are still push- ing for safety and change. Do our efforts for change lead to peace and justice . . . or not?

The peace plan contemplated by the Trump Administration will offer Palestinians limited sovereignty over limited territory.

The plan is much closer to the Israeli position than the Palestinian:

Despite growing tensions with the Palestinians, US President Donald Trump still intends to reveal a US peace plan for the Middle East. The plan will apparently be divulged right after the US Embassy moves to Jerusalem and after Trump’s meeting with North Korean leader Kim Jong Un.

According to a senior US diplomat in Tel Aviv, the fact that Palestinian President Mahmoud Abbas refuses any contact on the matter with US officials and that he had bad mouthed David Friedman, the US ambassador to Israel, has not altered Trump’s determination. Actually, messages on the evolving plans are conveyed nowadays to Ramallah by Egypt, Jordan and Saudi Arabia. More so, the March 20 meeting in Washington between Trump and Saudi Crown Prince Mohammed bin Salman was largely dedicated to two major topics: the common front against Iran in the region (including the Iran nuclear deal issue) and Israeli-Palestinian peace.

END_OF_DOCUMENT_TOKEN_TO_BE_REPLACED

Today Palestinians in Gaza will take part in the March of Return to mark the 70th anniversary of the Nakba, when some 750,000 Palestinians were expelled from the newly-created State of Israel.

By Institute for Middle East Understanding | May 13, 2015

Tomorrow, Palestinians in Gaza will take part in the March of Return to mark the 70th anniversary of the Nakba (“catastrophe” in Arabic), when some 750,000 Palestinians were ethnically cleansed to make way for a Jewish-majority state of Israel. Many of the participants will be Nakba survivors and their descendants, who have been denied their internationally-recognized legal right of return to the lands they were expelled from during Israel’s establishment.

Here are some quick facts about the Nakba.

END_OF_DOCUMENT_TOKEN_TO_BE_REPLACED

In the name of the Jewish people, Netanyahu is insisting that Palestinians recognize three Jewish political hawks as honest brokers of a non-existent peace agreement.

The Israelis, through US President Trump, are sticking a Jewish finger consisting of Friedman, Jason Greenblatt and Jared Kusher into the Palestinians’ faces, in front of the whole world.

“Is that anti-Semitism or political discourse?” asked U.S. Ambassador to Israel David Friedman with feigned innocence, in response to what Palestinian President Mahmoud Abbas had said about him, as if he were a helpless pogrom victim at the beginning of the last century in Eastern Europe rather than an ambassador of the world’s strongest superpower, which encourages Israel to ride roughshod over the Palestinians.

Abbas attacked Friedman on Monday for saying Jewish settlers were building on their lands in the West Bank. “Son of a dog. Building on their land? Your are a settler and your family are settlers,” Abbas said. . . . END_OF_DOCUMENT_TOKEN_TO_BE_REPLACED

Israel has flagged the drones, tear gas, sniper fire, even tanks it will employ against thousands of Palestinians planning to approach the Gaza border. But confronting a PR campaign with the language of force only invites disaster.

Israel needs to prepare for the coming celebration and marching season with an extensive public diplomacy effort, not only to celebrate our own independence, but to give those that wish to mourn, the room to do so.

The Palestinians are planning and producing a huge PR event. The stage is set, and the curtain will be drawn this Friday, March 30th. Organizations in Gaza are initiating a series of events that will challenge Israel on the ground, physically and militarily, but their real intended target is the public arena.

As Israel organizes its own public relations opportunities in celebration of its 70-year anniversary, complete with a bonus additional PR event, the opening of the new American embassy in Jerusalem, the Palestinians plan to march.

Palestinians in Gaza intend to kick off their series of events by erecting “return camps,” tent campsites along the area bordering Israel. Some assessments have suggested Hamas is going to rally around 100,000 people along the border area in a huge show of force. . . .

Over the last few days, reports in the Israeli media have multiplied about how the security forces will confront the oncoming demonstrations and riots. Various means of riot dispersal, dropped from drones; tear gas; water cannons; targeted sniper fire against the main instigators; and even reports of tanks being deployed along the Israel-Gaza border. . . .

What appears to be lacking from the Israeli preparation is the response to the political challenge.

END_OF_DOCUMENT_TOKEN_TO_BE_REPLACED

There are multiple players influencing life in Gaza, but the humanitarian situation there is largely the result of Israel’s restrictive access policy.

Travel permit requests go unanswered for months, even for those seeking urgent medical care or to visit ailing relatives. Hundreds of traders have been blocked and slapped with travel bans that curtail their ability to do business. Absurd new restrictions were introduced, preventing students and aid workers from traveling with laptops.

Over the past few months, many unlikely characters seem to have started to care that Gaza is facing a humanitarian crisis. Except it is not exactly compassion for the people facing the crisis driving the discourse as much as a warning call about the dangers lurking in their desperation.

Israel’s chief of staff, decorated generals, and even its decidedly not-dovish education minister, Naftali Bennett, have said that when Gaza suffers, Israelis are endangered. America is also concerned. In a “brainstorming session” held at the White House last Tuesday with representatives of the international community, US President Donald Trump stated that the worsening conditions in Gaza “require immediate attention.” If it weren’t so tragic, it might be comical considering that these are the same characters pulling the strings and deciding Gaza’s fate.