Seattle premier of film on Muslim-Christian peacemaking narrated by Jeremy Irons, with opening remarks by the producer.

During the Crusades, Saint Francis of Assisi risked his life by walking across enemy lines to meet the Sultan of Egypt, the Muslim ruler Al-Malik al-Kamil. This remarkable encounter, and the commitment to peace of the two men behind it, sucked the venom out of the Crusades and changed the relationship between Muslims and Christians for the better.

Join us for this film premiere to learn about the remarkable spiritual exchange between the Sultan and the Saint, and the great risks they took for peace. 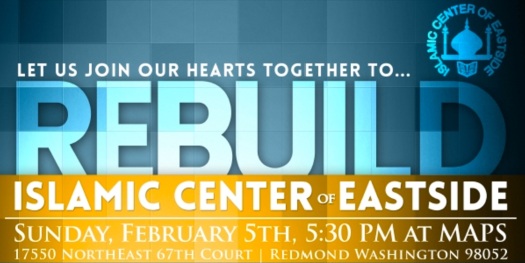 Please join our brothers and sisters at the Islamic Center of the Eastside for this important fundraising event.

Islamic Center of Eastside (ICOE) is one of the oldest masjids in the Seattle area and has been in operation for more than 20 years. On January 14, it was burnt down in an arson attack. The fire consumed the walls, the imam’s musallah, the sisters’ area, the roof, and other parts of the building. ICOE is a place of prayer, dawah, children’s classes, relief, youth and women activities. Hundreds of families live close to the masjid and hundreds of people attended the masjid every day. It is time to help one of our oldest institutions back on its feet. The community is rallying to rebuild the ICOE masjid and is requesting your assistance in this effort. Please attend the fundraiser if you can, and donate to their relief effort.

What a difference a week makes.

When Barack Obama was in office — remember the good old days, just over a week ago, when we didn’t wake up every morning and wonder what new atrocity was emanating from the White House — Republicans were apoplectic about his use of executive orders. They called them “unilateral edicts” and “power grabs.” As Iowa Senator Charles Grassley once said in a floor speech: “The president looks more and more like a king that the Constitution was designed to replace.”

What a difference a week makes.

Now many of those Republicans are as quiet as church mice as Donald Trump pumps out executive orders at a fevered pitch, doing exactly what he said he’d do during the campaign, for all of those who were paying attention: advancing a white nationalist agenda and vision of America, whether that be by demonizing blacks in the “inner city,” Mexicans at the border or Muslims from the Middle East.

Trump’s America is not America: not today’s or tomorrow’s, but yesterday’s.

Trump’s America is brutal, perverse, regressive, insular and afraid. There is no hope in it; there is no light in it. It is a vast expanse of darkness and desolation.

END_OF_DOCUMENT_TOKEN_TO_BE_REPLACED

Yates felt she was in an “impossible situation” and had been struggling with what to do about a measure she did not consider lawful. A Justice official confirmed over the weekend that the department’s office of legal counsel had been asked to review the measure to determine if it was “on its face lawful and properly drafted.”

In a press release, the White House said Yates had “betrayed the Department of Justice by refusing to enforce a legal order designed to protect the citizens of the United States.”

The White House has named Dana Boente, U.S. attorney for the Eastern District of Virginia, as acting attorney general. Boente told The Washington Post that he will agree to enforce the immigration order.

Earlier on Monday, Yates ordered Justice Department not to defend President Trump’s immigration order temporarily banning entry into the United States for citizens of seven Muslim-majority countries and refugees from around the world, declaring in a memo that she is not convinced the order is lawful.

END_OF_DOCUMENT_TOKEN_TO_BE_REPLACED

Acting Attorney General Sally Q. Yates, a holdover from the Obama administration, ordered the Justice Department on Monday not to defend President Trump’s executive order on immigration in court.

“I am responsible for ensuring that the positions we take in court remain consistent with this institution’s solemn obligation to always seek justice and stand for what is right,” Ms. Yates wrote in a letter to Justice Department lawyers. “At present, I am not convinced that the defense of the executive order is consistent with these responsibilities nor am I convinced that the executive order is lawful.”

The decision is largely symbolic — Mr. Trump’s nominee to be attorney general, Senator Jeff Sessions, is likely to be confirmed soon — but it highlights the deep divide at the Justice Department and elsewhere in the government over Mr. Trump’s order.

END_OF_DOCUMENT_TOKEN_TO_BE_REPLACED

“To those fleeing persecution, terror & war, Canadians will welcome you, regardless of your faith. Diversity is our strength #WelcomeToCanada.”
— Justin Trudeau on Twitter

Canadian Prime Minister Justin Trudeau has a message for refugees rejected by U.S. President Donald Trump: Canada will take you.

He also intends to talk to Trump about the success of Canada’s refugee policy.

Trudeau reacted to Trump’s ban of Muslims from certain countries by tweeting Saturday: “To those fleeing persecution, terror & war, Canadians will welcome you, regardless of your faith. Diversity is our strength #WelcomeToCanada.”

END_OF_DOCUMENT_TOKEN_TO_BE_REPLACED

Congressman Don Beyer says, “We have a constitutional crisis” over refusal to release travellers from Muslim-majority countries after judge grants temporary stay.

By Edward Helmore and Alan Yuhas / The Guardian
January 30, 2017

“We continue to face border patrol’s noncompliance and chaos at airports around the country,” said Marielena Hincapie, director of the National Immigration Law Center. Officials, she said, were “Kafkaesque” in their confused responses, adding that Trump’s order “has already caused irrevocable harm, it has already caused chaos.”

Customs and Border Protection (CBP) agents defied the orders of federal judges regarding Donald Trump’s travel bans on Sunday, according to members of Congress and attorneys who rallied protests around the country in support of detained refugees and travellers from seven Muslim-majority countries.

On Sunday afternoon, four Democratic members of the House of Representatives arrived at Dulles airport in Virginia on word that people had been detained and denied access to lawyers.

“We have a constitutional crisis today,” representative Don Beyer wrote on Twitter. “Four members of Congress asked CBP officials to enforce a federal court order and were turned away.”

END_OF_DOCUMENT_TOKEN_TO_BE_REPLACED

There should be nothing surprising about what Donald Trump has done in his first week — but he has underestimated the resilience of Americans and their institutions.

Some Americans can fight abuses of power and disastrous policies directly — in courts, in congressional offices, in the press. But all can dedicate themselves to restoring the qualities upon which this republic, like all republics depends: on reverence for the truth; on a sober patriotism grounded in duty, moderation, respect for law, commitment to tradition, knowledge of our history, and open-mindedness.

I am not surprised by President Donald Trump’s antics this week. Not by the big splashy pronouncements such as announcing a wall that he would force Mexico to pay for, even as the Mexican foreign minister held talks with American officials in Washington. Not by the quiet, but no less dangerous bureaucratic orders, such as kicking the chairman of the Joint Chiefs of Staff out of meetings of the Principals’ Committee, the senior foreign-policy decision-making group below the president, while inserting his chief ideologist, Steve Bannon, into them. Many conservative foreign-policy and national-security experts saw the dangers last spring and summer, which is why we signed letters denouncing not Trump’s policies but his temperament; not his program but his character.

We were right. And friends who urged us to tone it down, to make our peace with him, to stop saying as loudly as we could “this is abnormal,” to accommodate him, to show loyalty to the Republican Party, to think that he and his advisers could be tamed, were wrong. In an epic week beginning with a dark and divisive inaugural speech, extraordinary attacks on a free press, a visit to the CIA that dishonored a monument to anonymous heroes who paid the ultimate price, and now an attempt to ban selected groups of Muslims (including interpreters who served with our forces in Iraq and those with green cards, though not those from countries with Trump hotels, or from really indispensable states like Saudi Arabia), he has lived down to expectations.

END_OF_DOCUMENT_TOKEN_TO_BE_REPLACED

With the advent in Washington of an Administration with radical new priorities regarding Israel, and a disdain for Palestinian rights, Palestine is facing a daunting reality.

It is abundantly clear that the United States, in the age of Trump, and Israel, in the age of Netanyahu, will do nothing to change this picture. In this context, the Palestinians face stark choices. They can either submit to the dictates of the U.S. and Israel or they can fundamentally and urgently redefine their national movement, their objectives, and their modes of resistance to oppression.

With the advent in Washington of an Administration with radical new priorities regarding Israel, and a disdain for Palestinian rights, Palestine is facing a daunting reality. In recent years, ascendant political currents in America and Israel had already begun to merge. We have now reached the point where envoys from one country to the other could almost switch places: the Israeli Ambassador in Washington, Ron Dermer, who grew up in Florida, could just as easily be the U.S. Ambassador to Israel, while Donald Trump’s Ambassador-designate to Israel, David Friedman, who has intimate ties to the Israeli settler movement, would make a fine Ambassador in Washington for the pro-settler government of Benjamin Netanyahu.

Whereas America’s solicitous concern for Israel and its disregard for the Palestinians were once cloaked behind evenhandedness, under Trump we are set to see a more complete convergence between America’s political leadership and the most chauvinistic, religious, and right-wing government in Israel’s history. It will be this Israeli government and its new American soul mates who will call the tune in Palestine for at least the next several years.

END_OF_DOCUMENT_TOKEN_TO_BE_REPLACED

No other government has its embassy in Jerusalem.

“Why would a president-elect decide to begin his presidency by playing with the blood of Palestinians and Israelis? Why? For whose sake? . . . This will destroy us as Palestinian moderates. This will bring extremism to the region.”
— Saeb Erekat, chief Palestinian negotiator

It started, as it has in American presidential races for decades, as a campaign line, one that weary Israelis and Palestinians hear but rarely take seriously: Donald J. Trump promised to move his nation’s embassy to Jerusalem from Tel Aviv.

But by Thursday, the eve of Mr. Trump’s inauguration, those decades of promises seemed very real — with reverberations far beyond stone and cement.

Mr. Trump himself made perhaps his strongest statement on the issue on Thursday, telling a conservative Israeli news outlet, “You know I’m not a person who breaks promises.”